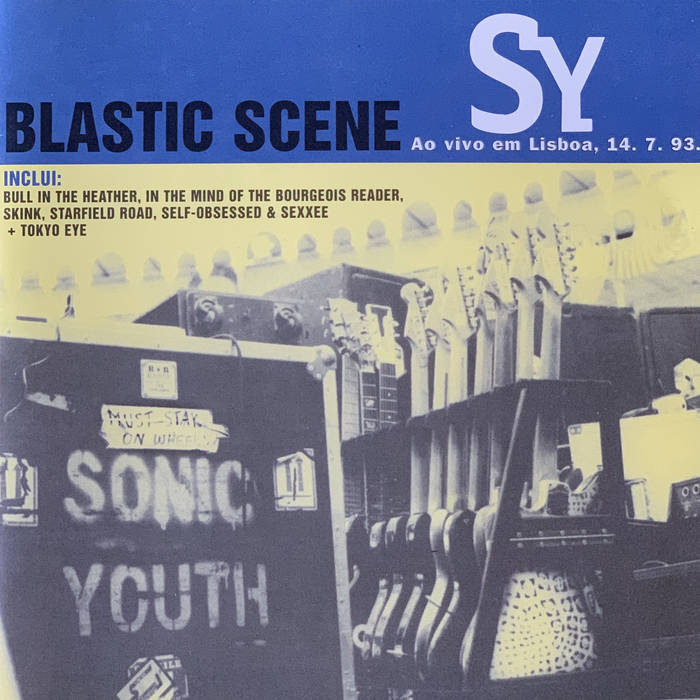 Ashton Richards Amazing sounding bootleg aside from a few volume spikes. Some of these songs saw very few live performances, so it's cool to hear them with particular enthusiasm. Favorite track: Self-Obsessed And Sexxee (Live).

This is where Sonic Youth's "Blastic Scene” first appeared and where ‘it’ all began.
It’s a bit of a long story but I think by now it is maybe worth recalling it.

In late '91 I was commissioned to produce an artist project in the form of a page for the weekend magazine of the Expresso newspaper - as part of a series of commissioned artist pages.
I came up with the idea of producing an ad for an imaginary record label - Moneyland Records - publicizing ‘next year’s' releases for that (fake) label. I was still living in my hometown - Caldas da Rainha, 1 hour north of Lisbon - and the idea of having a REAL record label was not even remotely foreseeable in my head. I could only fantasize with it in my art [this was when people like Sherry Levine, Richard Prince and others where playing with the idea of fake - and I used to promote Tina & The Top Ten as “The very first all Portuguese fake American rock’n’roll band” ahah].

I came up with 10 imaginary records, from a very eclectic mix of artists, gave names to the records and designed the covers (mostly using colour Xerox, a dot-matrix printer, hand-lettering and collage). Among the ‘wishful-imaginary-fake’ records there was one by Sonic Youth, titled Blastic Scene. There was an album by Tina & The Top Ten - something we at the time were very far from even dreaming - Teenage Drool only came out by the end of ’94.
There was an album by No Noise Reduction (me & Rafael Toral). Also just a far dream at the time - The Complete No Noise Reduction came out in '95. And there was an album by Christian Marclay & Lee Ranaldo, titled ‘No Side Bs’ - to be out on vinyl, for sure.

On February '92 the gallery I was working with at the time was present at the ArCo art fair in Madrid. I produced a spin-off work, using a framed copy of the ad plus, on the side, ‘real-fake CDs’ - basically just xeroxed covers inside empty jewel boxes - all hanged on the wall. I went to the fair myself and while there I met this woman Barbara Mosca, from Kunsthalle Zurich, where Christian had made his Footsteps installation. I told her I was a big fan of Christian and owned a copy of Footsteps myself. She liked my "fake record label” piece and said Christian would like it too, so when back in Zurich she would sent me Christian’s address so that I could send him a copy. A month or so latter I got a letter — an 'old time' letter by postman — from her with, as promised, Christian’s address in NY. Following suit I sent him a copy of the original newspaper page (I had bought a bunch) and some post card with a few kind words.

A couple of months latter I got a letter form Christian. A nice card and kind (handwritten) words. He said that he found it really funny that I had thought of a record by him and Lee, because he and Lee had been talking of doing something together. I, in turn, found it amazing ‘coz I never imagined that the two musicians even knew each other.
Christian finished his letter with his phone nbr. and saying that I should call him if I ever was going to be in NY - I had never been at that time and had no perspective of possibly going.

Sometime in the summer of 92 I went to see Lulu Blind in some club in Lisbon, with my friend Rui Toscano — Rui had just been in Seattle for a month or so — his brother was studying there and he went to visit him. Lulu Blind’s show was amazing and we walked for a while after the show, complaining that there was not a label in Portugal that could put out bands like Lulu Blind, Tina & The Top Ten, Red Beans and others. Rui said: we should start a record label, you already have the name for it: Moneyland Records. I was like, um, wow, that would be fantastic, but how can we do it. On that same night we came out with a plan: make a compilation with six bands on three 7” singles. Each band would pay its share part and get copies. And so it was. Moneyland Records triple single compilation came out in November 92. What had started as an artistic ‘joke’ was now a real indie record label. wow…!

By the end of 92 a new fellowship was announced for Portuguese ‘multimedia’ artists, honoring Portuguese artist Ernesto de Sousa (died in 88) who had been friends with John Cage, Nam June Paik, Phill Niblock and many others. Phill Niblock’s Experimental Intermedia Foundation would host the artist for a month in NY. There were not too many multimedia artists in Portugal at the time so I thought I had a chance. I applied with some sound-and-video-and-computers-and-sensors project of sorts and I got the grant. So, in early march 92, on a chilly winter night, I arrived in NYC, meeting Phill in his amazing loft, putting stamps on that month’s EIF-program-newsletter. And so that was my first task as a multimedia artist in NY: licking & sticking stamps with Phill Niblock!! Ahahah - to me it all seemed absolutely amazing. After a few days of getting myself into NY a bit I thought of calling Christian. I did and we set to have lunch a couple days latter. Christian was lovely - he his a lovely guy - we talked all lunch and I told him that I would love to give a copy of the Moneyland Ad to Lee, plus a couple of other gifts. Christian gave me Lee's phone number and said he would call you beforehand so that you knew some Portuguese artist-musician was going to call. Some days later he called me at Phill's (of course they new each other) to tell me he had told Lee about me. Following morning I called - I was nervous-excited as all SY fans, ahaha. Lee suggested having a coffee latter that day. We met and walked to Phil’s place and I gave Lee a copy of the ad, a couple of Moneyland triple-singles, and some photo prints of works I had done. Including a photo of candies and 7” singles that I had made just days before leaving for NYC - Sweet Music it was called. That photo ended up in Lee’s alternative cover for the CD edition of Experimental, Jet Set, Trash & No-Star.

Around mid-May I got a fax from Lee saying SY was coming to Lisbon in July and that SY would like Tina & The Top Ten or some other band from that triple single to play as support. I contacted the local promoter. I also got in touch with my friends that were doing a weekly music program for the Portuguese state TV culture channel. They were excited with the idea of doing a special program around that day. And so that was how Zé Pinheiro and Pedro Fradique came to be part of this story - Pedro has been music programmer at Lux Club for 20 years now, at the time he was music journalist and part-time photographer for Blitz music paper, and for the Pop-Off TV program. He took the photo that is on the cover of the Blastic Scene CD.

Zé Pinheiro filmed the whole show with sound taken directly from the main mixer, plus a pair of ambient mics. Some days after, we got together to watch the video and we were amazed by it. Not just the filming was great but the sound was great. The whole show was great. I kept a copy of the audio on a DAT tape, and whenever I listened to it I was thinking that it was just too good not to be out there somehow, for other SY fans to enjoy. I got in touch with Lee, sent him a copy of the audio recording (already mastered by Rafael Toral). The band listened to it and agreed to an ‘authorized bootleg’ to be released by Moneyland Records, in an edition of 1500 CDs, half of them to be sold by the band directly via their fan club. Blastic Scene was released on July 1995.

That was how our friendship started - and that is the full story of Blastic Scene.

Originally issued as a semi-official bootleg CD on Moneyland Records in July 1995.