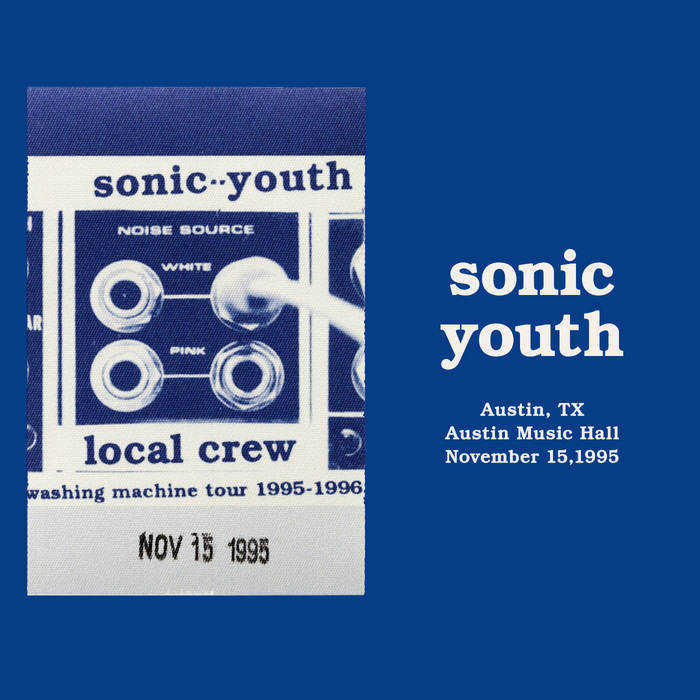 bcb723 This is the holy grail. A fucking official release (the first I believe?) of a "Washing Machine"-era show from the band that made me fall in love with noise. Many of these songs are lost to time in that they were only played on this tour & were never performed live again after the infamous 1999 theft of SY's gear and irreplaceable pedals that formed the DNA of the "Washing Machine" soundworld. As serious an instant buy as I could recommend. Just put on "The Diamond Sea" and completely drown. Favorite track: The Diamond Sea.

Matthew Perpetua So excited SY finally released a live recording from the Washing Machine era, and for a good cause too! Favorite track: Saucer-Like.

tuirennder The Washing Machine tour at last! But what is track 5? WAHING Machine? Unreleased material !!

Sick and tired Wow. I only have the German Dusseldorf recording Esater 1996 as only available Washing machine tour live document. Much much thanks for the first 1995 concert album now officially. Sound is great. Favorite track: Bull In The Heather.

thenewspaper Grieve no more, origami-muscled falcon.
Eyes pressed to the world as it flees in all dimensions.
A leaf rattles, and then some smoke, turning toward you, departs or simply forgets itself.
If the world must be seen into being, do you create and
kill every small thing that, rustling, flees this shattering poundstone of gaiety?

the lemon of pink

In response to alarming restrictive legislative measures against the women of Texas (and increasingly elsewhere) seminal NYC leading musical lights Sonic Youth have announced plans for new releases on their Bandcamp and store to fundraise for Fund Texas Choice (fundtexaschoice.org) and the Abortion Support Network (www.asn.org.uk) on Friday, November 5th.

On that day, the band makes two vintage live sets available in full, from the Austin Music Hall, Austin, Texas from 1995 (on the post-Lollapallooza 'Washing Machine' tour), as well as a gig in Dallas at the Gypsy Tea Room ('Rather Ripped' tour) in 2006. These classic, previously unreleased shows go up for stream and download on November 5th, with 100% of their proceeds to support the two causes.

Also, three new Sonic t-shirt designs will be made available: two from Texan photographer/friend of the band/author of the recent 'Texas Is the Reason' book Pat Blashill , and a third tee featuring a variation of Richard Prince's "Dude Ranch Nurse" artwork. The first Blashill tee features a photo from their Austin/Continental Club '85 gig, the second features pro-femme lyrics from their song "Flower" coupled with various photos of assorted women from the 80's Texan punk scene. Proceeds of both of these will benefit the causes as well

In its posthumous state, Sonic Youth have dedicated great energy in making previously unreleased sounds available to their fanbase. Historically, their trailblazing cross-country tours of back to the mid 80's consolidated their independent/artistic stance with many formative Texan bands and artists, including the likes of the Butthole Surfers, Big Boys, Daniel Johnston, and Meat Joy. The enduring support from Lone Star state fans for SY warrants a favor returned specifically for this state's fanbase, and in broader scope, Sonic Youth support a national and world community where abortion is embraced as health care and a human right.